There is nothing new about presidential administrations blaming the previous administration for its ills. It is to be expected at the beginning of any administration. The Biden administration has taken it to a new art form, however. Jen Psaki was asked a question about the border and managed to throw Trump under the bus while at the same time claiming Biden is leading from the front. 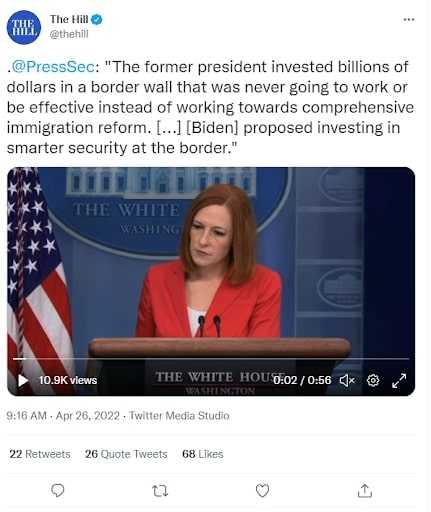 The Border Patrol is reporting that it is on pace for 2 million known contacts in 2022. That is a record by all accounts. There is a direct correlation between when Biden was elected and when the numbers at the border began to surge. The administration has adopted specific strategies that it knows will increase the numbers. Retracting Title 42, for example.

Jen Psaki knows that the border crisis has been purposefully engineered by the administration and so does the press corps. Mentioning Trump is the ultimate red herring. It distracts both conservatives and liberals from the real issue. Namely, that the far left wants as many people coming across the southern border as possible.

The common wisdom is that this strategy is to build future voters. This is only partially true. The crisis also has the added benefit that it pulls focus from other things that the administration is doing. Immigration is a hot-button issue for conservatives. It is one of the reasons that Donald Trump got elected. The left would love for there to be an endless fight over the immigration issue as they continue to erode the rest of the nation’s institutions.

The Democrats know that they are going to suffer generational losses in the midterms. That means they must try and solidify whatever gains they can before then. As the border crisis worsens there will be only so much oxygen left for conservatives to battle on other fronts. The blame-shifting by Psaki is not the result of lazy thinking. She knows exactly what she is doing. If conservatives do not wake up, an open border will be the least of their problems.