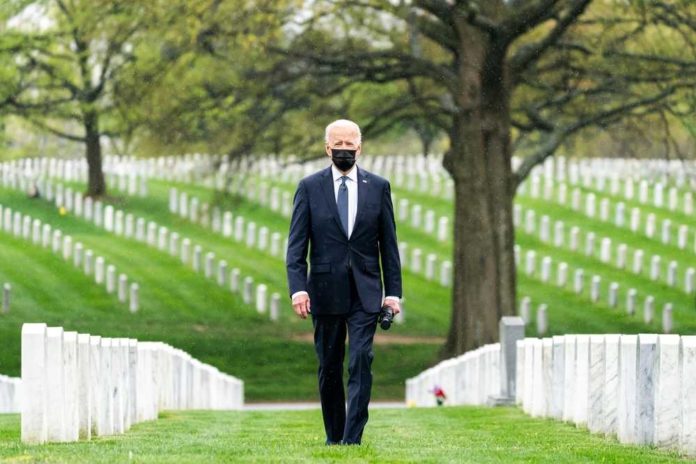 MSNBC contributor Jason Johnson, a professor at Morgan State University, said that President Biden was happily retired before forces outside of his control forced him back into the political arena.

“If you believe the story, which I do, that [Biden] said, ‘I had no intention of running for president,’” said Johnson. “He was, he was the retired war hero out in the mountain, chopping wood. Charlottesville brought him back into the fight that he never thought he’d have to fight again.”

While poetic, Johnson’s statement contains at least one falsehood. As Newsbusters pointed out recently, Biden never actually served in the military. Instead, he received four draft deferments for asthma.

In the Fall of 2020, President Biden did recount what he claims was his call to arms, the Charlottesville riot in August 2017 where a white supremacist fatally hit a protester with his car.

President Biden described his “call to arms” moment like this: “Just a week ago yesterday was the third anniversary of the events in Charlottesville. Close your eyes, remember what you saw on television. Remember seeing those neo-Nazis and Klansmen and white supremacists coming out of fields with lighted torches, veins bulging, spewing the same anti-Semitic bile heard in Europe in the ’30s. Remember the violent clash that ensued between those spreading hate and those with the courage to stand against it. And remember what the President said when asked? He said there were ‘very fine people on both sides.’ It was a wake-up call for us as a country. And for me, a call to action. At that moment, I knew I’d have to run.”

After the events in Charlottesville, many in the liberal media along with leaders in the Democratic Party — Biden himself amongst them — blamed President Donald Trump of praising white supremacists.

As the Daily Wire reported, Trump did say there were “very fine” people on both sides of the clash, but a broader context shows that he was not referring to white supremacists. A full transcript of his remarks can be found here.

To fight against the “racist” Donald Trump, Democrats chose a candidate who has had to apologize for statements like: “Poor kids are just as bright and just as talented as white kids,” when speaking to supporters.