Americans appear to be scratching their heads numerous times a week, attempting to comprehend precisely what President Biden meant. Joe Biden has compelled the American people to engage in a game with the apparent leader of the free world. In this game, individuals must guess three times what the doddering guy (Joe Biden) is saying. Unfortunately, it may be a rather tricky game at times. Joe Biden mumbled in answer to a recent immigration query. People became perplexed as to what he said. According to some, it sounded as though “my butt” had been wiped. Regrettably, this is true, but why would he say such a thing? Nobody knows for sure, but Joe Biden is capable of being crazy at any time. There is no justification for lunacy. That is the person that Americans address as their leader.

Furthermore, If anybody would be under the impression that the footage wasn’t actual, here it is in its entirety. It’s not as if the context is helpful. Joe Biden totters up to them, appearing to be suffering from some gait issue. The reporter asked questions that are necessary to reconcile immigration? Or do you have a road to citizenship? He answered with the weird phrase described previously. 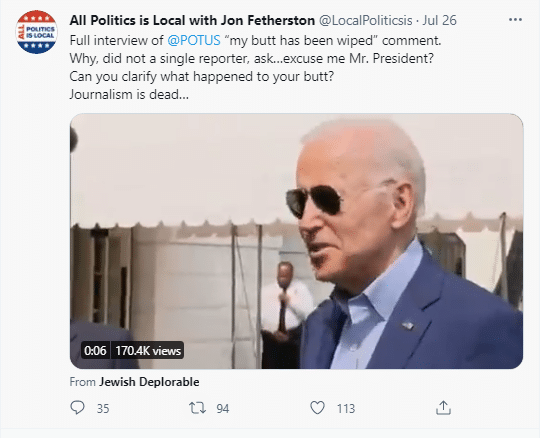 The reporters all chuckle as though this is usual, and he continues to mumble. On the other hand, his more coherent remark requires further explanation because it does not make sense. But then Americans have to question who it was that wiped his butt?
Despite this, the reporters were essentially asking a fundamental question about if they are planning to include citizenship in the reconciliation bill or not? However, among all the strange things, he doesn’t respond to that.